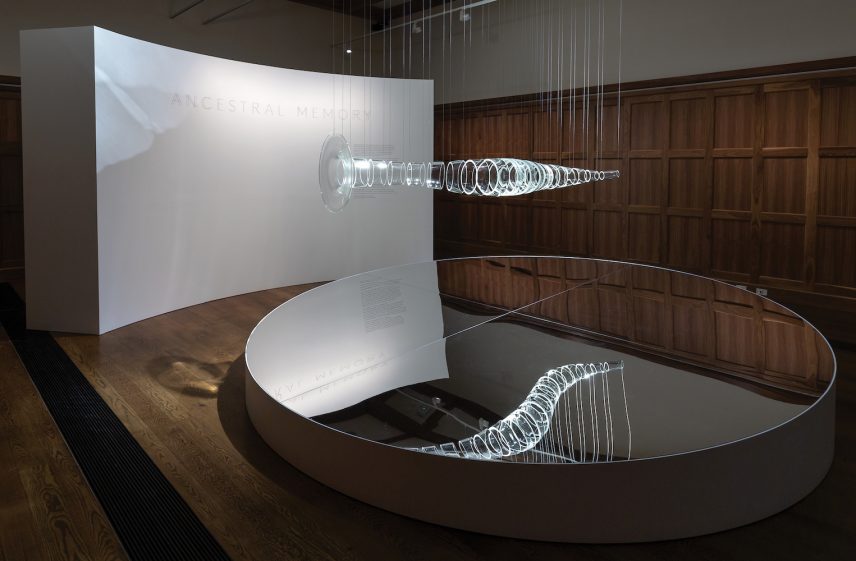 Jefa Greenaway is currently working on the design and implementation of the University of Melbourne’s New Student Precinct. His extensive research into the story of water on the lands of the Kulin Nation, where the University’s Parkville campus is located, has been integral to the development of Ancestral Memory. This inaugural project in the Treasury exhibition space, Old Quad acknowledges the Indigenous heritage of this land and celebrates the continuation of culture through a major new commission and exhibition curated by Mutti Mutti, Wemba Wemba, Yorta Yorta and Boonwurrung woman Maree Clarke. Focusing on the regeneration of cultural practices as a means through which to encourage greater awareness of Indigenous culture, the project presents Maree Clarke’s work alongside that of artists Connie Hart, Edith Terrick and Patrick Bellamy.

SC: How did the story of water emerge during your research for the New Student Precinct on the Parkville campus?

JG: We know that the Parkville campus is located on the lands of the Kulin Nation, so the starting point was really to engage with key Indigenous stakeholders, including traditional owners and community representatives of the Woiwurrung and Boonwurrung language groups, and really start to understand their perspectives and some of the oral and anecdotal narratives that reside in place. The next step was to look at some of the archives the University holds, particularly the Map Collection, and understand that this place is actually an important place—there are still remnants here of connection through time, particularly to pre-contact. What transpired from this research was that the story of water has always been, and continues to be, very important to this place. It is a story that traverses the campus.

SC: Can you still see evidence of water on the campus? And how did your research into the University’s cultural collections contribute to your findings?

JG: On the northern end of the campus, adjacent to the cricket ground, is a group of river red gum trees. Importantly, when we hear about a river red gum, that tells us there was a watercourse coming through the University. There are four river gums that are believed to predate the settlement of Melbourne. They are estimated to be somewhere in the order of 300–400 years old, so that is very much a pre-contact story.

We can also see [from early maps] that in the centre [of the University], there was a swampy area, probably a billabong, as well as a watercourse that traversed diagonally through the site. Adjacent to Grattan Street is Bouverie Street. Maps indicate that this street used to be known as Bouverie Creek. This tells us that the water story that exists on this site is tens of thousands of years old. There are also photographs in the University Archives of an ornamental lake in front of the Old Quad, where the Concrete Lawn is now located. This also tells us that there would have been a billabong in that location.

SC: Did the water determine/affect the building of the University?

JG: It did affect the orientation of elements on the site. The first major building was the Old Quad. It was to align with a public square on Grattan Street, which is now known as University Square, but, in fact, it had to shift slightly to accommodate that wet, marshy area. What tends to happen when we start to build in particular areas is that we find the path of least resistance. If it’s a wet area, it’s not very good for footings, so you shift the building a little bit to accommodate that. These buildings become really important parts of that story.

SC: I have also heard the fascinating story of the eels on campus and their extraordinary adaptation and resilience over time.

JG: Through a series of conversations and anecdotal information, we uncovered an eel migration route that still traverses the University campus. That has piqued a lot of interest and generated a lot of conversations, particularly with traditional owner groups and the Indigenous cohort of students and staff.

The eels continue to swim through the stormwater pipes of the University. They rear their heads up in some of the ponds and stormwater grates that exist on the campus. For me, the metaphor of the eel is quite powerful. It is a story that connects over time and place because what it talks to is the notion of resilience—resilience of Indigenous people, after 240 years, and their commitment to showcasing culture and connecting and maintaining relationships to country.

It also has a bigger story that speaks internationally. Not only do the eels transmogrify when they move from salt water to fresh water and back again, their migration patterns also connect in a global sense. This eel story connects to a water story which cuts across Country, so, for instance, here we are on Kulin Nation Country, but there are strong stories around eel migration down Portland way, on Gunditjmara Country. Water stories and water bodies connect through time and Country. So that’s a powerful metaphor. But then when we start to broaden that out, we start to see that the migration of the eel connects to New Zealand, across to South America, through Asia and Oceania and back to Australia again.

SC: The water story and, in particular, the story of the eels connect communities across Victoria and around the world?

JG: Yes, so when we understand that the University is a diaspora of Indigenous and non-Indigenous, the story connects to international students, of which we have a large cohort. This is a story which can resonate with anybody. The eel migration enables us to have a sense of pride, to celebrate connection to the oldest continuing culture in the world. It provides an opportunity to celebrate Indigenous culture and to showcase Indigenous culture as part of our everyday experience.

Jefa Greenaway is a descendant of the Wailwan and Kamilaroi peoples of north-west New South Wales. He is an architect, interior designer, academic, director of Greenaway Architects and Chair of Indigenous Architecture + Design Victoria (IADV). IADV is a not-for-profit organisation that provides support and advice regarding all aspects of architecture related to Aboriginal people in Victoria, including encouraging mainstream architects to be more engaged with Indigenous culture.

Samantha Comte is Curator/Exhibitions Coordinator at the Ian Potter Museum of Art, University of Melbourne.