A recent acquisition by the Ian Potter Museum of Art, Lino, Canberra, tile formation and overlay (2001), is the first work by Canberra-based artist Vivienne Binns to enter the University of Melbourne Art Collection. Binns, who was born in 1940 and has worked since the early 1960s, is an important Australian artist, known for her abstract, complex, multi-layered and at times collaborative work. Lino, Canberra, tile formation and overlay forms part of Binns’ continuing series In memory of the unknown artist, which she characterises as ‘an exploration and recognition of work by anonymous artists and designers which is everywhere about us’.1 These concerns underpin much of Binns’ work as she continues to articulate an expanded definition of art through a range of diverse projects and inclusive approaches to making art. Significant threads in the complex fabric of Binns’ practice include her engagement with abstraction, a framework in which she communicates an expanded definition of the art object; her contribution to feminist discourse; and her role in pioneering important community arts projects whose influence continues to shape socially engaged art practices in Australia.

Graduating from the National Art School, Sydney, in 1962 with a Diploma of Painting and Drawing, Binns held her first solo show, Vivienne Binns: Paintings and constructions, at Watters Gallery, Sydney, in 1967, after an intensive period using automatic drawing processes derived from Dada and Surrealism to develop her own formal language. The work in the exhibition asserted female subjectivity through an energetic depiction of sexuality and playful use of colour, but was criticised by some at the time for its ‘rough, unfinished’ appearance.2 Stephen Scheding reported that it ‘would be the most unprofessional work I have seen in a well-known gallery’.3 Such sentiments by critics of the time attempted to situate Binns as an outsider to the art community. But Rodney Milgate had a different perspective: ‘it will make you question every social value we live by’,4 foreshadowing what Deborah Clark has identified as ‘a key moment in the nascent Women’s Art Movement … the works [Phallic monument (1966), Suggon (1966) and Vag dens (1967)] loom large in Australian art history’.5 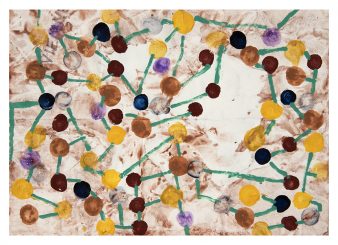 During the 1970s and 1980s Binns, rather than taking her practice overseas, turned her geographic focus inward, working with artists and communities beyond the traditional sphere of art, particularly in regional Australia. This was a productive and diverse period for Binns, during which she produced and collaborated on influential community art projects such as Artsmobile (1972, one of the first community art projects in Australia), Mothers’ memories, others’ memories (1979–81) and Full flight (1981–83). In each of these projects, Binns took a democratic approach to making art, her experiences informing the development of her inclusive and still challenging principle that art is ‘something humans do, rather than something only artists do’.6

Mothers’ memories, others’ memories (MMOM) encapsulates Binns’ process-based artistic method and underpins many of the ideas present in Lino, Canberra, tile formation and overlay. Binns developed MMOM while she was artist-in-residence in the General Studies Department at the University of New South Wales (UNSW) in 1978. The project mirrored her focus at the time on craft practices, such as enamelling, and was shown in two iterations, the first involving staff, students and peers at UNSW, the second in the heart of Sydney’s western suburbs: Blacktown. The Blacktown participants were local women of different ages, who identified themselves as wives and mothers.7 As Binns stated: ‘they create a sort of picture of the person they’re working with, or their own lives … the mode of expression is similar to a school project that might have been the last time (or experience) they had of putting material together for presentation’.8 The lack of an art space in Blacktown at the time resulted in an exhibition of the project at Westpoint Shopping Centre, which was—and still is—a major social meeting point for the area.9 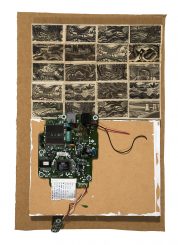 Binns returned from central- west New South Wales in 1983 after working with communities as part of Full flight, and immediately shifted to working in the studio, presenting five solo exhibitions between 1985 and 1990, at Watters Gallery in Sydney and Bellas Gallery in Brisbane. It was in 1995 that Binns began the continuing series In memory of the unknown artist, of which Lino, Canberra, tile formation and overlay is a part. This series recognises the artistic output of those not traditionally deemed ‘artists’, such as ‘designers of fabric, linoleum, carpet and bathroom tiles, housewives and traditional craftspeople, as well as “weekend” painters and street artists’,10 artistic expression that Binns asserts ‘is everywhere about us’.11 A number of works from this series are now in museum collections, such as Japanese fabric III: In memory of the unknown artist (2001, National Gallery of Australia), Lino, Canberra and tile formation (2000, Canberra Museum and Gallery) and Nylon over the Lachlan: In memory of the unknown artist (2005, National Gallery of Australia). Binns’ strategy to recognise and acknowledge artistic expression in the everyday suggests that all objects, be they organic or manufactured, have ‘slippages’ that reveal their ‘structure, process and history’;12 Binns asserts that creativity is an embedded function of being in the world.

Lino, Canberra, tile formation and overlay was made of pieces of linoleum that had been found in various domestic and public spaces in Canberra. As Binns recalls, she came into possession of the lino, which had been salvaged from old houses and buildings under renovation, through Helen Maxwell’s gallery in Canberra. The linoleum used in this work is a patchwork of colours and designs and has superficial cracking and decay. Binns has applied a systematic method to arranging the lino, creating a visually rich and textural surface in the interplay of design, colour and form. There is energetic, multicoloured paint splatter, cracking and discolouration, while a section of lino of faux-timber design is in relatively good condition.

For the formal organisation of the linoleum in Lino, Canberra, tile formation and overlay Binns used the arrangement of tiles in her bathroom as a template; she had been ‘contemplating patterns we live with; those used in carpet and lino designs, as well as on tiles in bathrooms and kitchens … I had been thinking about bringing them together in some way’.13

Lino, Canberra, tile formation and overlay sits alongside a recent gift of the artist, a series of small works on paper and board including Connections in autumn with Vivienne (2017) and Technologies connect in nature watch (2015), both representative of Binns’ interest in materiality and abstraction. Acquisition of works such as these reflects the objective of the Ian Potter Museum of Art, as custodian of the University of Melbourne Art Collection, to present a rich and inclusive cultural history for the university and the wider community. Binns’ approach to art-making enriches the holdings of Australian work in the collection, particularly of works by women artists such as Angela Brennan, Destiny Deacon, Anne Ferran, Elizabeth Gower, Sally Smart and Jenny Watson. Lino, Canberra, tile formation and overlay, significant as an example of Vivienne Binns’ complex practice and place in her career, provokes a re-reading of the art object and a re-evaluation of this important artist’s role in Australian art history.

Alyce Neal is Assistant Curator at the Ian Potter Museum of Art, University of Melbourne. She was a board member at SEVENTH Gallery from 2016 to 2018 and has worked at a number of arts organisations, including Monash University Museum of Art, the Australian Centre for Contemporary Art, and the Biennale of Sydney.