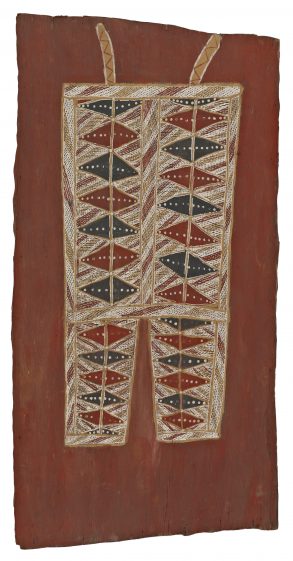 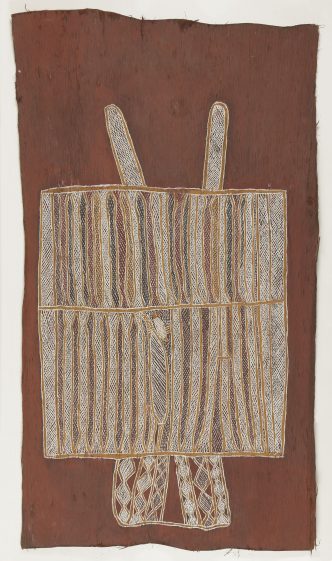 The remarkable bark paintings presented in this exhibition date from 1935 to early 1950. Collected by Professor Donald Thomson in the mid-1930s and early 1940s and by Dr Leonhard Adam in the early 1950s from Central and Eastern Arnhem Land, Caledon Bay and Groote Eylandt in the Northern Territory, these extraordinary works of art are first representations on bark of important ancestral beings, sacred clan designs and totemic animals made in the region specifically for outsiders. They represent some of the earliest translations onto bark of designs and motifs painted on bodies, sacred objects and rock surfaces.

The immense and intricately detailed compositions of principal Yolngu painters, such as Marawili Mundukul, display his depth of cultural knowledge and his extraordinary painting skills. Mundukul and others record onto bark ancient madayin minytji [sacred clan designs], which are normally painted on a man’s torso during ceremony to embody the enduring power of totemic ancestors. A masterful suite of works depict anthropomorphic forms that reference the shoulders, torso and thighs of men, and illustrate the immediacy and inventiveness of transferring body markings to bark.

In contrast to Yolngu evocations of eternal ancestral presence, Anindilyakwa artist Minimini Mamarika from Groote Eylandt paints totemic animals and narratives from the recent past – such as the visitation of Macassan trepang fishermen in the nineteenth century. Using iconography that is characteristic of the island’s rock art, he places floating forms on black backgrounds produced with manganese unique to the region. Related works by Wonggu Munubggurr, the famous Djapu leader and artist from Caledon Bay, are shown with the work of Mamarika and others from Groote Eylandt, offering a rare opportunity to consider the compelling stylistic similarities of the little-known artworks from these two regions.