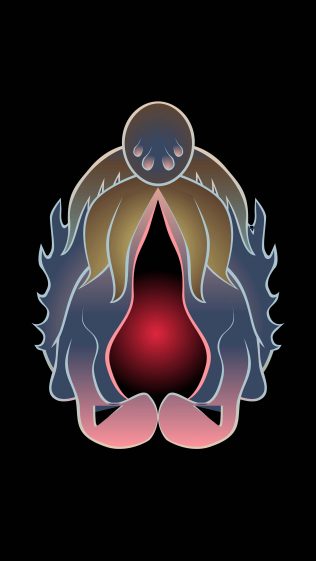 For more than three decades, Philip Brophy has been researching and analysing changing perceptions of the nude in art from Neoclassicism and Romanticism to the present day. His research has inspired a new series of digital animations, video projections and prints, collectively titled Colour Me Dead, which is bent on reclassifying art history’s icons of unbridled Eros as both pathologically rapacious and symptomatic of sexually explosive schisms within the self.

Brophy initiated his commentary on ‘the rampant body-ness of contemporary times (horror genres, health fads, machine-men toys, dance music etc.)’ in the early 1980s, with writings like Horrality and The Body Horrible, and films like Salt, Saliva Sperm & Sweat and Body Melt. Colour Me Dead takes specific aim at how sexual morphologies and mutations are equally derived from artworks valorised within the art museum canon. The project asserts that from Pablo Picasso’s grotesque shapes through to Jackson Pollock’s splattered landscapes, and from Andy Warhol’s mortician’s gaze to Yves Klein’s exploitative anthropometries, modern artists have flirted with violent depictions of the body, decimating the once-idealised nude in a spectacle of aggressive deconstruction. Colour Me Dead forensically joins the dots to query how the nude descended such a slippery slope.

Brophy’s six new digital works have been created in parallel to the first 6 chapters of his examination of over 3,000 artworks in his 18-chapter book of the same name—a virtual tome which examines how the nude has historically been posed, lit, depicted, rendered and transformed. Mirroring Brophy’s parallel practice in writing and making, this premiere presentation of Colour Me Dead artworks comprises two digital videos, two digital animations and two suites of digital prints. Through the works’ preponderance of figures nude and naked, Brophy forwards his thesis that seemingly beautiful images often betray darker psycho-sexual compulsions in art-making.

Colour Me Dead is the third in the series of Vizard Foundation Contemporary Art Projects, a creative initiative of the Vizard Foundation which offers artists a $30,000 grant to produce new work. The projects are designed to encourage mid-career and senior artists to take risks and explore new directions in their practice.