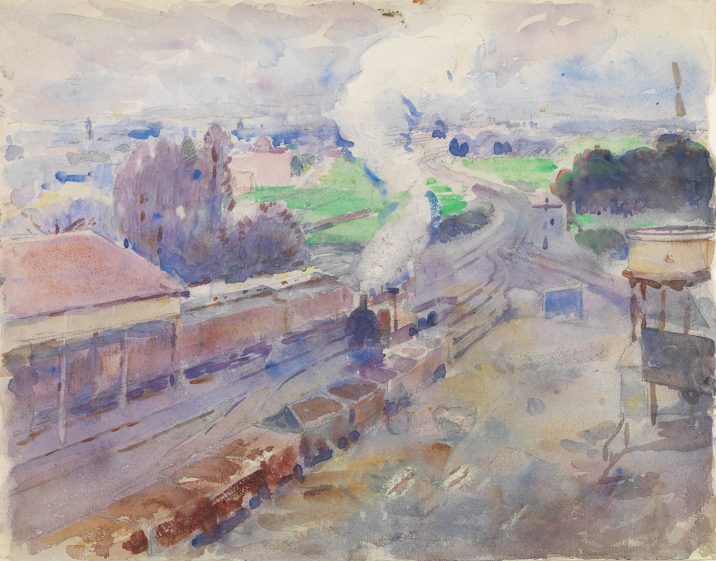 In a 1935 lecture presented at the National Gallery of Victoria to coincide with the recently opened Loan Exhibition of Contemporary British Art, Norman Macgeorge declared ‘I would like to be a modernist myself’. A long-time guide-lecturer at the Gallery, Macgeorge’s declaration was both a defence of Modernism in the face of criticism from artistic conservatives, such as Arthur Streeton, as well as a statement on his own practice.

As a critic Macgeorge fully embraced the direction of modern art. He had a broad understanding of the art historical canon as well as of more recent artistic developments from to Fauvism to Cubism to Surrealism. As an advocate he argued strongly for the National and State Galleries to unleash their conservative shackles and to acquire modern works for their collections.

However, while Macgeorge was a great supporter and advocate of Modernism within the realm of public debate, his own artistic practice remained on the conservative side of radical invention. His early works followed the lineage of Australian Impressionism and later, after a trip to Europe, he began to adopt the stylistic and conceptual characteristics of Post Impressionism, especially after the works of Paul Cézanne and Vincent van Gogh. Today this may seem restrained and even quaint. However, it should be remembered that even in the 1930s artists like the Post-Impressionist remained relatively unknown to the broader Australian public.

Norman Macgeorge: an unlikely Modernist, celebrates Macgeorge as both a great defender of Modernism and reveals his engagement with early European Modernism in his own artistic practice. It shows his debt to artist such as Cezanne and van Gogh and highlights his adoption of both stylistic and thematic characteristics as he grappled with a quickly changing artistic environment.