Designing 'The Shop': the Parkville campus past and future | Ian Potter Museum of Art 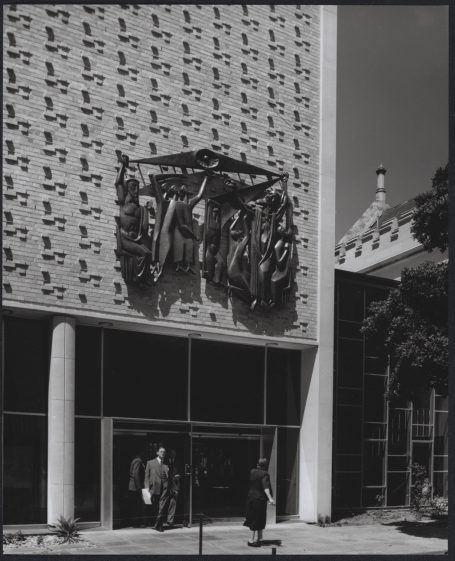 The fire which destroyed Wilson Hall in 1952 marked the end of one kind of university and the triumph of another. Images of the university from the century before the fire show a landscaped park with isolated Gothic-style buildings. In these photographs, people are either promenading, dressed up, or absent. Paintings, both oil and watercolour, concentrate on the gardenesque. There are pencil renderings and many etchings of the Gothic buildings, but these nearly always depict ornamental windows or entrance doors. Again, people are largely absent. The views are of exterior spaces, and somewhat postcard in style, as if the university were a sanatorium or retreat from which one could send small messages to life outside.

Wilson Hall was rebuilt in 1956, in time to celebrate the university as a place of serious, modern work. Black and white photographs document the new post-war buildings and their functions. Interiors take pride of place—lecture theatres, laboratories, seminar rooms. Again, people are mostly absent. The serious enterprise of measurement, formulae, of making things work predictably to a standard, appears to have taken over completely. Even the drawings used to construct the campus’s new buildings become very technical, the architecture being thought of as elegant engineering. What better medium to record this than the sharp-focus documentary photograph, supposedly an objective image, with positives printed again and again from a single negative.

This coincidence of medium and subject is also present in the nineteenth-century paradise images. They are all handmade and relate to the skills of the leisured classes. Even the etchings are hand-drawn and printed. Interestingly, both etchings and black and white photographs share an alchemical, hidden process—darkness, baths of strong chemicals and the mystery of emergence as the images appear or are peeled off the plate.

This modernist, technocratic and machine-age university has now also been backgrounded. The equivalent event of the Wilson Hall fire of 1952, was, I suggest, the acquisition of a separate postcode for the university in 1999. Once a garden of philosophers, then laboratories full of technicians, the university at the turn of the twenty-first century had become a data bank. Tertiary institutions are now part of what Buckminster Fuller prophesized would be a quaternary industry—one concerned with information. The images of this new university come out of a digital, web-based world of computers, USBs, all kinds of pods and small containers. Wiring is stuffed into conduits between buildings and through every crevice a building can offer.

This succession of small Zeitgeists should not be seen as a succession of replacements. All three visions of the University of Melbourne—the garden of leisure, the laboratory, the data network—coexist. In fact, aspects of the data network were present at the university’s foundation, but in a technology without electricity, and therefore not so evident. The same could be said for the laboratory. The System Garden is a mixture of retreat, experiment and data, and has been so since its inception.

There has been an annual flow of thousands of students through this university. This seasonal plenitude is evident in statistical records, but appears to be missing in university images. The colleges to the north of the academic compound have in their collections many group photos, and at least one remarkable home-movie compilation of students and staff in dress-ups larking about, as if the nineteenth-century bucolic spirit moved to the north after its expulsion from the main campus. But here too, the different universities are overlaid. The laboratories may have stayed on the main campus, giving students the experience of ‘walking to work’, but the virtual world has infused the colleges. The new online university appears to have no perceivable boundaries, either spatial or temporal, and begs for a new kind of descriptive image—not the exterior view, or an interior with work stations, but perhaps a haze of data of global dimensions (if dimensions is the right word).