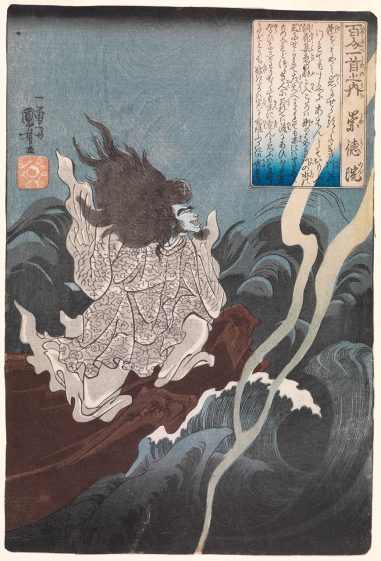 Inscribed on this work is a poem from the Shikashū anthology, commissioned by the retired Japanese emperor Sutoku-In (1119-1164) in 1144. In this dramatic artwork, Sutoku-In stands upon a boulder surrounded by seething waters and raging winds. In the poem there is also a reference to a boulder, which functions as a metaphor for the sorrow of separated lovers and their longing to be reunited in calmer waters, but here it takes on an additional significance relating to an important moment in Sutoku-In’s life. Exiled after his defeat in the Hōgen civil war of 1156, the emperor sent sutras to Kyoto as offerings in memory of his deceased father. When these were refused and returned to him, his rage was so great that he cast the sutras into the sea and then ravaged the country in the form of a tengu, a winged creature, half-man, half-bird.