Following the installation of his work Some Significant Equations, 2019 at the University, British contemporary artist Liam Gillick discusses his recent project with Potter Director Kelly Gellatly.

Kelly Gellatly: Your new commission for Melbourne, Some Significant Equations, 2019 builds upon a previous work you created in 2015 in Paris’ Gare du Nord. How did this project come about?

Liam Gillick: The work at Gare du Nord was made to coincide with the COP21 meeting in Paris that same year, which led to the famous Paris Agreement. It came via a direct invitation from the French national rail company SNCF, who wanted me to produce something for the Paris cross-rail system, RER. I used that line when I was a teenager and knew it pretty well.

A good rail system is crucial in fighting the effects of global warming, so I was very happy to propose something. I knew from the beginning that I wanted to avoid any of the normal clichés around climate; I am more interested in emphasising the scientific basis of the problem.

I wanted to create work in a simple way that would be cheap to produce and easy to maintain. Rather than fabricating something new I painted out the existing platform in bright colours and added a series of equations in matte black vinyl text on top. We installed at night during the gaps between the rail service which meant that we could execute the whole thing really quickly. SNCF has a great art program and it was good to see them engaged with the conference and with art. 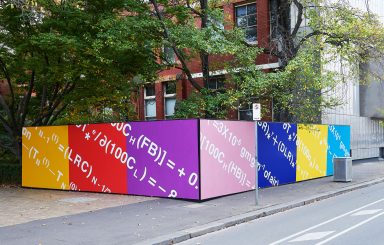 KG: The ‘significant equations’ that fill the surface of your new work for Melbourne are the creation of celebrated climatologist and meteorologist Syukuro Manabe. How did you become aware of Manabe’s work?

LG: Right from the beginning I wanted to work with equations. I had attempted this before in a proposal for [the Guggenheim Museum in] Bilbao and I wanted to work with an equation that shows the effect of city structures on climate, but it wasn’t accepted. In 2015 I did equation work about pressure and flow for the Biennale in Istanbul and a further work on data interpretation for the European Central Bank in Frankfurt.

Then, in preparation for the project in Paris, I started looking for early papers on climate analysis and found the work of Syukuro “Suki” Manabe, a Japanese-American mathematician who did most of his work at Princeton. I attempted to read his early papers and found it was possible to follow what he was doing. To put it simply: science doesn’t come from a vacuum and [to illustrate this] Manabe was trying to create a better way to model global climate at every point from the ground to the stratosphere. The reason for this was that earlier work attempting the same thing was rather crude but it did establish the fact that a small rise in global temperature would potentially cause a complete runaway effect very rapidly.

Manabe wanted to create better mathematical tools to understand this process and that’s what his papers from 1964 and 1967 do. Manabe was born in 1931, so is from the generation that suffered World War II. This generation understood the threat to the planet from man’s activities. His contribution to the science of climate change is extraordinary and extremely important for contemporary understanding and analysis of what is taking place now.

My work in Paris was a tribute to him and this new work in Melbourne is a further acknowledgement of his brilliance. I don’t claim to understand the maths completely but the equations are elegant and functional. I believe that art should make us think, and that the subjects and content of art should not be limited. I want people to consider the science here and not just the vague appeals to do the right thing. I want people to understand that the science and maths behind our analysis of climate is more than 50 years old. It is not a political issue alone but can be examined and understood via the pure science of mathematics. 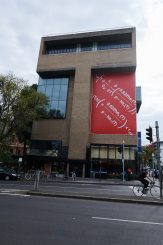 KG: Given your discussion, in the past, about the important role of ‘secondary’ architecture, does the idea of working on hoardings, billboards, and even the platforms of Gare du Nord function in this way for you?

LG: Absolutely. I am influenced by the legacy of particular conceptual artworks in this manner. Daniel Buren used billboards, among others. Later, Jenny Holzer and Barbara Kruger were also an influence.

KG: What is it about the way in which these works will be perceived that is of interest to you?

LG: I like the idea that artists get to take over the spaces of advertising. I have done it before in Miami, in Japan and in Denver.

KG: Do you have any thoughts on the way this work is both situated and will be understood within the academic context of the university?

LG: There is a double issue here; I want the work to be understood in the context of contemporary art and at the same time I want people to engage with the ideas beyond the art context. Generally, I would not excessively stress the art component. A university is a place of ideas and this is just another idea expressed graphically rather than in a written or spoken form.

Liam Gillick’s work, Some Significant Equations, 2019 was installed on the corner of Grattan and Swanston Streets and adorned a hoarding on Masson Road and Swanston Street at the front of the Potter from 18 April 2019 – 2 June 2019.