The University of Melbourne’s halls, meetings rooms, lecture theatres and auditoriums are graced with the portraits of their leaders from Chancellors to research scientists. These portraits are a mark of respect of the contribution of the individual represented and their office as well as  providing evidence of  turning points in the  life of the University and society as a whole.

The University of Melbourne was founded in 1855, seven years later Melbourne Medical School was established in 1862. Surprising from today’s educational perspectives, the tertiary education of dentists did not commence until 1904.

The early European dental practitioners came from various backgrounds but predominately received dental training through apprenticeships. However, a pivotal change occurred in 1884 with the formation of the Odontological Society of Victoria. The society consisted of a group of trained dentists and was modelled on the Odontological Society of Great Britain, established in 1856. It  transformed dental education in Victoria under the leadership of John Iliffe (1847–1914) through the establishment of a dental hospital and college in Melbourne. The Melbourne Dental Hospital commenced its activities in 1890, followed by the Australian College of Dentistry in 1897. Another major development was in 1904, a Faculty of Dental Science was established at the University of Melbourne, and the college became affiliated with the University.

Today, students and visitors to Melbourne Dental School are greeted in the main lecture theatres by portraits of heads of schools and professors mostly dressed in their academic gowns. There are a few exceptions of portraits where some individuals are wearing a suit, military uniform or a lab coat. All these portraits punctuate the history of dental education in Victoria. 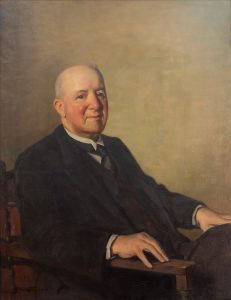 Part of the professionalisation of dentistry was the establishment in 1888, of the Dentists’ Act which established the Dental Board of Victoria. The first registrar was Ernest Joske (1858-1938) who became a powerful force promoting and defining the dentistry profession in Victoria. In recognition of his 50-year service as registrar, the dentists of Victoria commissioned a portrait by renowned painter Charles Wheeler (1880–1977) who had won the Archibald prize in 1933, and his portrait of Joske was a finalist in the 1938 Archibald Prize.

Joske was a lawyer not a dentist, an administrator not an academic but instrumental in establishing the framework for educating dentists in Victoria. He personally presented his portrait where he is posed sitting in chair formally dressed in a dark suit, a gift to Joske from the dentists of Victoria, to the Australian College of Dentistry. 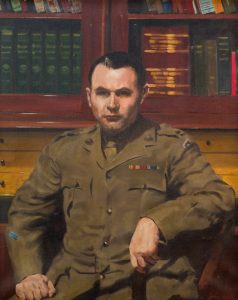 Another two portraits reveal different aspects of Professor Emeritus Sir Arthur Barton Pilgrim Amies (1902–1976) career, one in military uniform and the other in academic dress.   He was Dean of the University of Melbourne’s Faculty of Dental Science from 1934 until he retired in 1967. He contributed immensely to dentistry and oral and maxillofacial surgery in Victoria. Professor Amies had a distinguished military record in World War 2 (1939–1945).  After the war he became President of Melbourne Legacy in 1955. The portrait by John Heath ( 1893–1970)  shows Major Arthur Amies R.A.A.D.C. at his time of service. Interestingly, John Heath was also a dentist and a pupil of Max Meldrum.  Heath had served in World War 1 (1914–18) serving with Medical Corps in Egypt, Gallipoli and France so he could relate closely to Amies experiences. Amies joined the Australian Imperial Force in June 1940, serving with the 4th Australian General Hospital at Tobruk and the faciomaxillary/plastic surgery unit at the 2nd Australian General Hospital in Egypt. The stress and worry of the war years are imbedded on his brow as he sternly gazes at the viewer with his left hand powerfully clenched. 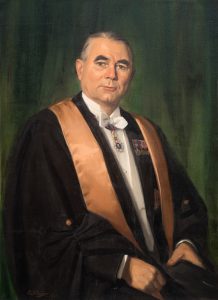 In contrast, the portrait of  Professor Amies by Patrick Fitzgerald (1922–2017), an internationally renowned portrait painter,  painted the year of Amies retirement shows him relaxed and confidently looking at the viewer. Amies was a powerful personality and extremely influential in the debate on fluoridation, it was his intense opposition that delayed its introduction. 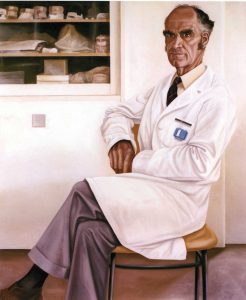 His successor, Professor Henry Forman Atkinson (1912–2016) had not always seen eye to eye with Sir Arthur, particularly over the question of fluoridation of water supplies, for which he was an ardent advocate. On his retirement in 1978 his portrait was painted by a young contemporary artist John Scurry (b.1947) in a tonal manner revealing a very different personality to his predecessor. Atkinson, although a very formal man is depicted in his laboratory coat reflecting his passionate commitment to the importance of research. John Scurry has skilfully captured Atkinson’s workplace  including a cupboard of delicately rendered dentures. After his retirement, Atkinson served as honorary curator of the museum, until his death in 2016, that today bears his name. 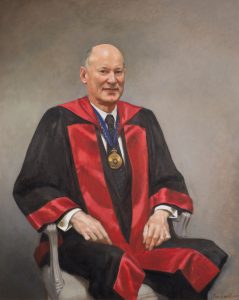 In 2017 Professor Eric Reynolds received the Prime Minister’s Prize for Innovation, an internationally significant achievement. Reynolds discovered the protein in dairy milk, which repairs and strengthens teeth, now sold worldwide as RecaldentTM. Tom Alberts ( b.1962) depicts Laureate Professor Eric C Reynolds, Head of the Melbourne Dental School 1998–2014 and CEO and Director of Research of the Oral Health CRC 2003–2018 in formal academic dress with his Order of Australia placed around his neck. His face expresses intense curiosity, a key to innovative research. This work was commissioned by the Melbourne Dental School, 2017 to commemorate one of their most innovative researchers.

Dentistry has often been at the forefront of major innovations in scientific and medical treatments. These initiatives, many led by academics at the University of Melbourne, have battled oral disease and collectively improved the general public’s health. These portraits mark moments in this remarkable history.

In recognition of his 50-year service as registrar, the dentists of Victoria commissioned this portrait of him by renowned painter Charles Wheeler, which was a finalist in the 1938 Archibald Prize, the year before Joske’s death.

Melbourne Laureate Professor, Head of the Melbourne Dental School 1998-2014 and CEO and Director of Research of the Oral Health CRC 2003–2018