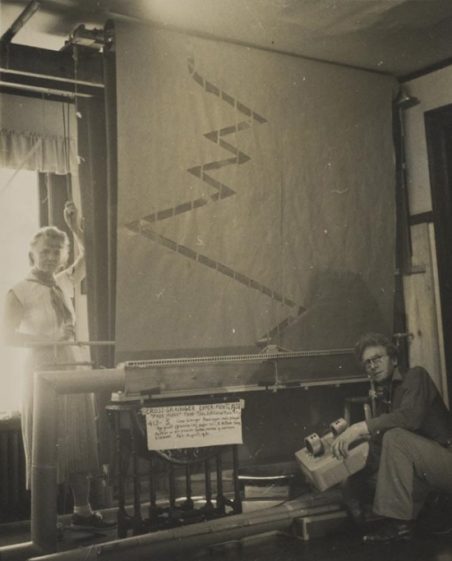 Cultural Collisions: Grainger | Griffins is presented in association with the Melbourne Festival

The tide-tossed reveries of Percy Grainger’s obsessive, unconventional mind are made manifest in this multi-screen installation film by acclaimed director Amiel Courtin-Wilson.

From the childhood moment in which he observed waves lapping against a boat’s side, pure and gliding tones exerted a pull on Grainger’s psyche. His obsession was such that for the rest of his life he would rail against the “tyrannical rhythmic pulse” and “moral harmony” of Western music.

Breaking Waves incorporates archival instruments, score fragments and the recent remaking of three of the composer’s original instruments to form an immersive portrait of this lifelong crusade to free music of conventional constraints. An immersive psychological portrait employing high speed, close up cinematography, it is an impressionistic gateway into the motivations that drove a singular artist.

Amiel Courtin-Wilson is one of Australia’s most striking filmmakers. He released his debut feature documentary Chasing Buddha at only 19 years of age, while his debut fiction feature Hail premiered internationally at the 2011 Venice Film Festival. Other acclaimed works include the documentary Bastardy and the Venice Special Jury Prize-winning Ruin. Amiel’s films have also screened at Sundance, Cannes and more recently the Whitney Museum.

Cultural Collisions: Grainger | Griffins is presented in association with the Melbourne Festival