Up from the Vaults October | Ian Potter Museum of Art 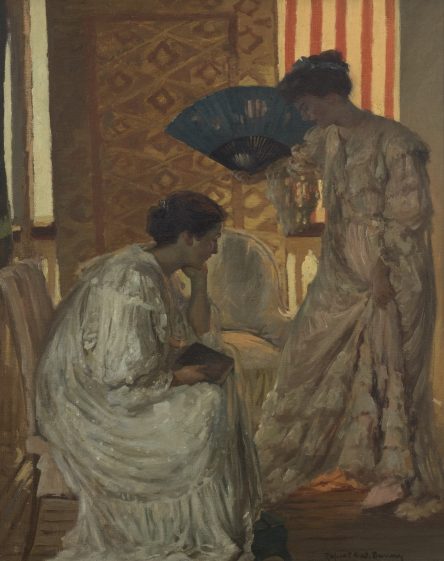 In the summer of 1908, Australian painter Rupert Bunny (then based in Paris) began a series of works entitled Days and Nights in August. Informed by his years in Europe, the series depicts the languorous leisure pursuits of women holidaying at a French seaside resort. These paintings reflect Bunny’s intimate knowledge of French society, fashion and entertainment of the time – drawing inspiration from his cosmopolitan existence living among fellow artists and performers in Paris during the Belle Époque.

In this talk we will explore some of the contexts that informed Bunny’s summer paintings, especially the fashions for dance and Spanish style that may have influenced the conception of a key work from the series, The New Step, from the University of Melbourne Art Collection. The settings of summer entertainment portrayed by Bunny will be compared with artworks by his contemporaries Charles Conder, Joaquín Sorolla and John Singer Sargent, while Hispanic music performed by guitarist Ken Murray will provide a sonorous evocation of the era.

Associate Professor Michael Christoforidis lectures in Musicology at the University of Melbourne. He has published extensively on Spanish music, dance and the guitar, including recent monographs Manuel de Falla and Visions of Spain (2017), and Carmen and the Staging of Spain: Recasting Bizet’s Opera in the Belle Époque (2018, with Dr Elizabeth Kertesz).

Dr Elizabeth Kertesz is a Research Fellow at the Melbourne Conservatorium of Music, University of Melbourne. She is co-author, with Michael Christoforidis, of Carmen and the Staging of Spain: Recasting Bizet’s Opera in the Belle Époque (Oxford University Press, 2018).

Dr Ken Murray is Senior Lecturer and Head of Guitar at the Melbourne Conservatorium of Music. As a guitarist, he has developed a singular path combining performance, composition, teaching and research. He has championed and recorded Spanish music from the early twentieth century, worked extensively with contemporary composers and has been active as a performer of Brazilian and South American musical styles. As a composer he has written a variety of works for guitar in solo and ensemble settings.

Our 2019 program, Inside Out, has been generously supported by
Peter Jopling AM QC, Andy Zhang and Calvin Huang.