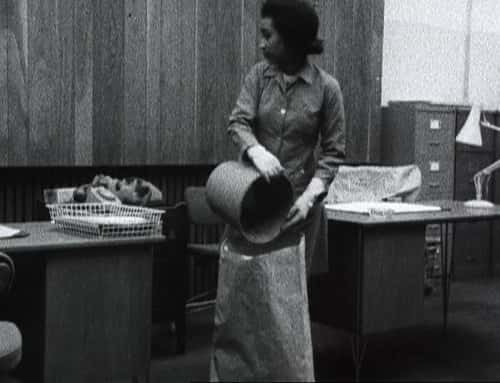 Nightcleaners part 1 is a documentary made by members of the Berwick Street Collective (Marc Karlin, Mary Kelly, James Scott and Humphry Trevelyan), about the drive to unionise the women who cleaned office blocks at night and who campaigners asserted were being victimised and underpaid. Intending at the outset to make a campaign film, the collective was forced to turn to new forms of documentation in order to represent the forces at work between the cleaners, the Cleaner’s Action Group and the unions – and the complex nature of the movement itself.

The result was an intensely self-reflexive film which implicated both the filmmakers and the audience in the processes of precarious, invisible labour.

This screening was presented in collaboration with Artist Film Workshop (AFW). AFW is a film collective based in Melbourne with a focus on 16mm film. For more information visit www.artistfilmworkshop.org