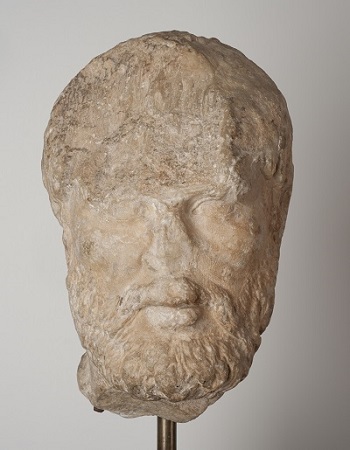 Though fashioned to look thoroughly of his class, the face of this marble portrait is also meant to depict a specific person, even if his identity eludes us. Clues such as the way the hair falls across the brow, or whether the irises have been drilled can help date and draw out comparisons to more intact specimens – but these details have been obliterated here. The forehead has been completely sheared off from the eyebrows to the crown. At least the beard might tell us something. It links this fellow to the time of Hadrian who was an admirer of the hirsute Greeks. Previously the Romans were conspicuously clean-shaven.