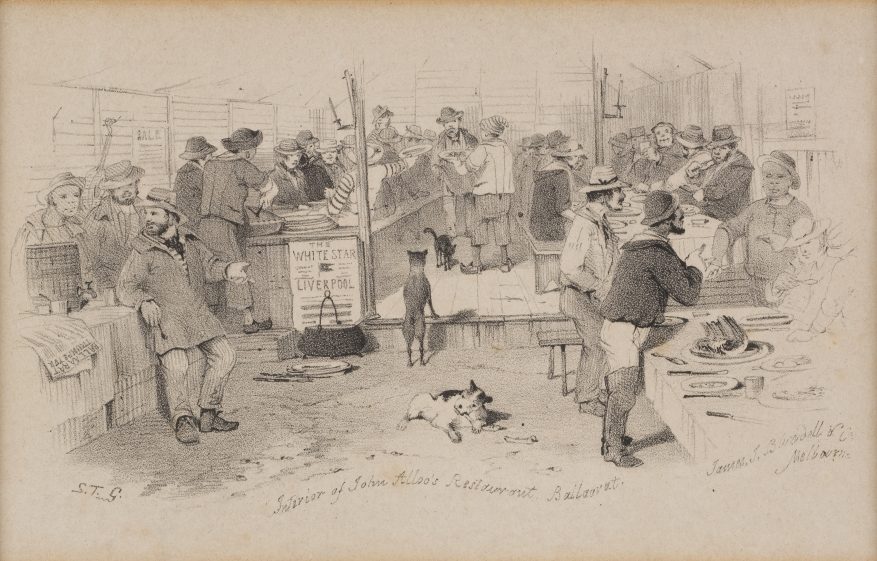 This small lithograph is the earliest known image to show a Chinese business in Australia. John Alloo (or Chin Thum Lok) was one of the thousands of Chinese men who flocked to south-eastern Australia’s goldfields, although Alloo probably arrived prior to gold’s discovery. He established a boarding house and successful restaurant in Ballarat, serving soups, roast meats and vegetable, puddings and pastries to the hungry diggers, as seen in S.T. Gill’s lively lithograph. In 1857 Alloo wrote an eloquent letter to the Argus newspaper, protesting against the ‘Chinese tax’ – £1 per month that all Chinese in Victoria were required to pay – an example of the racism that his community suffered. Alloo and his Scottish-born wife later emigrated to New Zealand.

Interior of John Alloo’s restaurant, Ballaarat
from The diggers and diggings of Victoria as they were in 1852 published by James J. Blundell & Co., Melbourne 1855
lithograph
The University of Melbourne Art Collection. Gift of the Russell and Mab Grimwade Bequest 1973