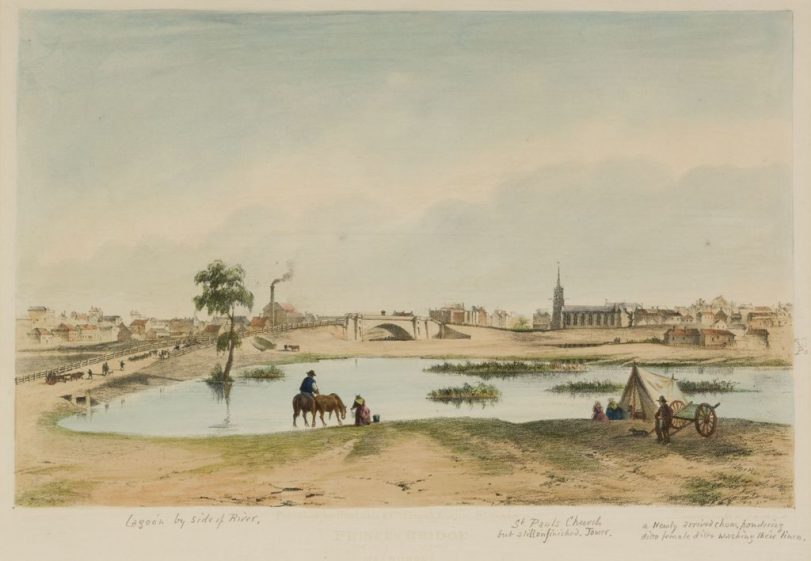 Up from the Vaults: As the river flows

In the first outing of our ‘Up from the Vaults’ series for 2020, Dr Liz Dean from the School of Social and Political Sciences will explore the significance of Birrarung (the Yarra River).

In 2017 the Victorian Government implemented the landmark Yarra River Protection Wilip-gin Birrarung murron Act 2017; legislation which recognises the Yarra River as a living entity and acknowledges the Wurundjeri Woi-wurrung people as its traditional custodians, while also protecting the river for future generations.

‘Wilip-gin Birrarung murron’ translates as ‘keep the Birrarung alive’ in Woi-wurrung; and significantly, the act was the first legislation in Australia to be co-titled in a Traditional Owner language.

While largely overlooked, this Act can promote public discussions about Sovereignty. In granting the rights of the river, the boundaries of ownership are put into question. It also creates a focus on Indigenous representations of the Birrarung/Yarra River and on Indigenous knowledge of and care for the river, how rivers shape themselves and how the settler state altered the Yarra River. The early representations of this river help us begin to explore the diverse layers of the river and the spaces it occupies.

PRESENTER DETAILS:
Dr Liz Dean is a Lecturer/Teaching Specialist in Sociology, in the School of Social and Political Sciences at the University of Melbourne.  Her current research interests include investigating the potential social impacts of the Victorian Government’s Yarra River Protection Wilip-gin Birrarung murron Act 2017.