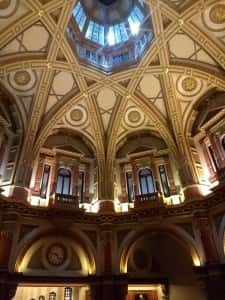 The struggle for democratic control of workplaces and urban development not only preserved irreplaceable heritage sites but changed the course of urban planning in Australia and continues to provide powerful lessons for modern social movements.

Many of Melbourne’s heritage buildings stand today only through union and community activism as part of Australia’s famous ‘Green Bans’ (1960s–70s). The Green Ban trail traces an important but little-known part of Melbourne’s history, revealing that much of the built and natural heritage we value today remains only through the actions of trade unionists and community groups.

While the world-famous ‘Green Bans’ are often associated with Sydney, Melbourne has its own powerful campaign stories of workers in the Builders Labourers’ Federation (BLF, a precursor to the CFMEU) refusing to destroy socially or environmentally significant sites. Attendees heard these accounts first-hand from Green Bans activist Dave Kerin as they walked from Melbourne’s iconic Trades Hall to some of the city’s most treasured buildings: the Princess and Regent Theatres, City Baths, Queen Victoria Market and others They learned the legacy of people power protecting heritage and public good.